It’s one thing to hear that the world’s biggest cat-a hybrid cub of a lion and tigress-resides in Myrtle Beach. It’s another to witness the massive 920-pound golden carnivore rising 12 feet upward on his hind legs to nibble a meaty morsel dangled by a petite trainer who serves the snack from a hunting stand as casually as a waitress delivering pancakes at IHOP.

On a scorching June morning when any sane soul would be chilling at a water park, dozens of animal-loving tourists and locals are opting for Myrtle Beach’s only safari tour. Just minutes off the main drag, tucked past rows of clear-cut mobile home parks, The Institute of Greatly Endangered and Rare Species, aka T.I.G.E.R.S., occupies 50 Eden-esque acres as South Carolina’s premier wildlife preserve for more than 130 animals, including 60 big cats. If an African safari is on your bucket list, why wait? This one doesn’t require 8,000 frequent flyer miles and a passport.

Founder Mahamayavi Bhagavan Kevin Antle, who goes by the refreshingly brief name “Doc,” opened the compound-his private residence-more than 30 years ago to share his passion for endangered species and subsidize conservation projects all over the world.

By 8:30 a.m., sweaty tiger-seekers are already milling around outside the preserve gates. Most are first-timers, eager to see if “the greatest hands-on animal experience in the world” will live up to its billing. Several returning veterans of past tours assure them that it will. The guests have obviously read the rules: No cameras. No flip-flops, dresses, dangly jewelry, backpacks or purses to catch an inquisitive paw.

The preserve gates-reminiscent of the curvy bamboo entry that separated villagers from King Kong-part for senior trainer Rob Johnson, our khaki-clad greeter and tour guide, to emerge via golf cart and review a few safety rules, such as leaving our snacks behind.

“If you have M&M’s in your pocket, the monkeys will find them,” he assures us.

First the paperwork: “Yes, I understand that these animals are wild and I will not sue you should I happen to be eaten,” or something like that. Sign here.

Smile for the cameras

Minutes later, we are chilling in an air-conditioned lounge with lofty, wood-beamed ceilings, comfy rattan sofas and oversized chairs on which guests eagerly plop to sample a tiny ceramic cup of high-octane java, African-style.

The lounge is paneled with awards, photos and TVs showcasing hundreds of films and commercial projects starring Antle’s animals. Johnson gives us the inside scoop on stars who have shared the spotlight with baboons, tigers and chimps.

Jay Leno would go toe-to-paw with any creature Antle trotted out during his many appearances on The Tonight Show. Jim Carrey could hold his own with baboons as Ace Ventura, but a guinea pig could scare Eddie “Dr. Dolittle” Murphy right off the set, Johnson confides.

We are still chomping on morsels of Hollywood gossip when trainers-including a bevy of exotic, youthful women dressed in their safari finest-turn our attention to the 30-foot panoramic windows behind us. There, inches beyond the glass wall, one of the largest cats on Earth is out for a stroll. Leashed and restrained by multiple trainers, Sinbad the liger is stalking his midmorning snack.

Ligers are only born in captivity and can grow larger than both their lion and tigress parents. Sinbad’s brother Hercules, who weighs 922 pounds, holds the 2014 record for largest living cat, as recognized by the Guinness World Records, although Sinbad is actually taller.

The group stops gasping long enough to follow trainers outside for a photo op with the big boy safely in the background. Next stop, another record holder: Ramses the cheetah. These spotted sprinters are the planet’s fastest land animals, blasting after prey at more than 60 mph. Meanwhile, habitat loss has them racing toward extinction just as quickly. Leashed at the neck and hindquarters and purring like a harmless kitten, Ramses seems to flinch at the slightest movement in our ranks. Cautious trainers distract him from fixating on any potentially tasty member of the audience. 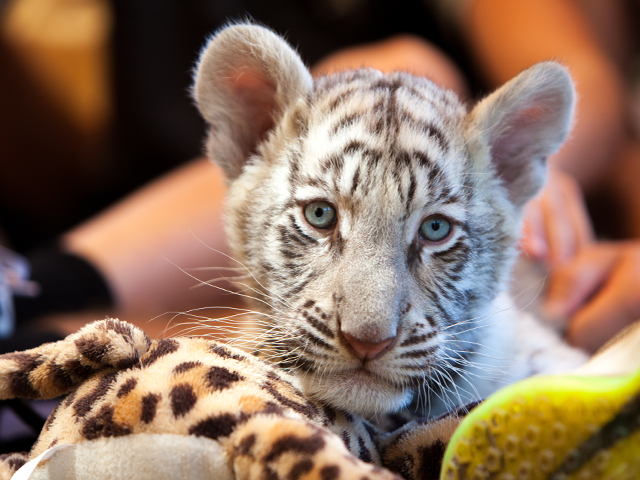 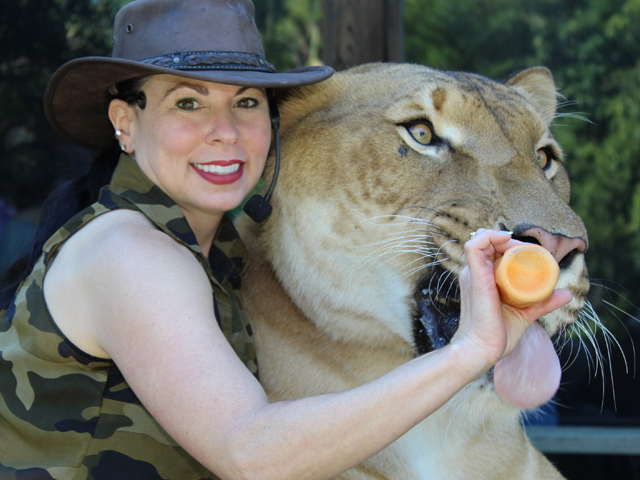 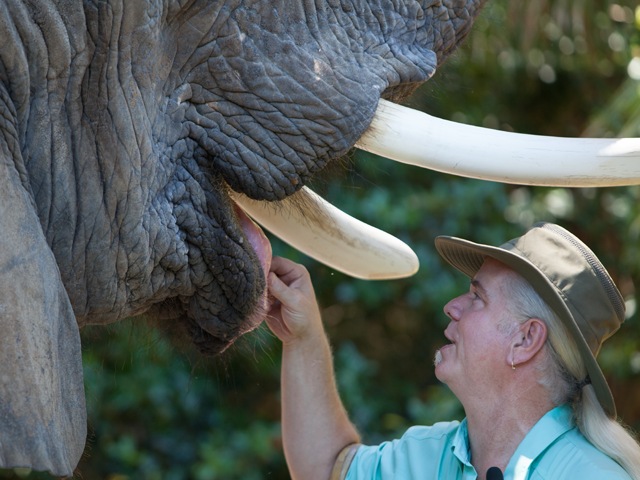 Doc Antle and Bubbles the Elephant

Successfully working with wild animals to gain their trust takes thousands of hours just to establish a basic bond. If the job appears glamorous, guess again. It’s a 24/7 commitment with no weekends or holidays off. There are no part-time jobs here, only unpaid apprenticeships open to passionate, single vegetarians who are ready to shovel feces and haul raw meat for a few years while they watch and learn. The squeamish need not apply.

Trainer Mari Gent, a statuesque, beaming brunette who looks more like a runway model than a cage cleaner, joined the program straight out of high school.

“I told my family I was running away with the circus,” she says. They were duly horrified, but have since come around.

We follow our leaders to a large octagonal corral to meet some animals still small enough to hold. “We’re going to let a bunch of cubs loose, if that’s OK,” Gent says to delighted guests.

Luxuriously soft and cuddly, the baby Bengals spend a few seconds on each guest’s lap, closely guarded by handlers ready with toys, bottled formula and reassuring belly rubs. “Do not take a tiger’s toy away because you become one,” a trainer cautions.

All tigers are born with exquisite blue eyes and are small enough to fit in your hand, but they’ll gain up to a pound a day. There’s a very small window-just a few weeks-when they’re strong enough to visit with safari guests but not yet practicing predators. So we pet them quickly while professional photographers click away.

A wild attention to detail

Between stops, guests are treated to appetizers of hummus, pita, fruit and nut bars, mini-smoothies and sips of African tea. Every location is ready for a centerfold in House Beautiful. If the safari crew was hired to clean motel rooms, five-star reviews would be the norm. Antle demands that every habitat remains eat-off-the-floor clean, so his human guests enjoy the same attention to detail.

Johnson, who has chased elephants off a Johannesburg runway, dived with sharks and brokered truces between impoverished natives and gorillas on other continents, is also an accomplished falconer. An enormous African eagle with formidable curved talons perches on his leather-covered arm to help Johnson demonstrate the rare art form.

We are escorted to expansive balconies to watch an adult tiger chasing a lure like a mild-mannered greyhound. This demonstration of an apex predator’s strength, speed and ferocity occurs nowhere else on earth, they say. Several trainers post themselves at the start and finish lines to coordinate the critically timed demo and reclaim the dog, as well as the unrestrained tiger when it hits the brakes.

Later in the tour, as guests gape from the balconies, Antle makes his dramatic entrance riding Bubbles, a 9,000-pound African elephant he rescued as a motherless baby more than 30 years ago, when her herd was decimated by ivory poachers.

An elephant’s trunk, the most complex organ in the animal kingdom, has 50,000 muscles, Antle tells us while gently stroking her trunk with a bamboo walking stick. To demonstrate, he presents Bubbles with a watermelon, a favorite treat. The same trunk that can delicately grasp a peanut applies more than 300 pounds of crush force to split the watermelon right on cue. Occasionally, Antle has been splattered with juicy pink fruit, but not today. It’s a clean kill.

Safari guests descend from their balcony viewpoint to feel the thick, bark-like skin on Bubbles’ trunk and join her for photo ops. Everyone gets to feed her carrots. She’ll eat several hundred pounds of food today, but always has room for the sweet vegetable.

The tour concludes back in the lounge, where chimps play beach ball and paint T-shirts with Jackson Pollock flair. Through a glass partition, we watch Antle’s son, Kody-a real-life jungle boy who never stopped smiling as he presented multiple animals throughout the day-swim playfully with large-clawed tiger pals and Suryia, one of the only orangutans known to swim.

These adventures are standard fare for Kody, who grew up with monkeys in his crib. “His sister was an elephant,” his father says. “His love of wild things comes naturally.”

Conservation at its core

At 58, Antle’s trademark ponytail and soul patch have turned white, but his eyes are still baby tiger blue. Although he’s spoken with hundreds of reporters and given thousands of tours, he’s still exuberant about his lifelong mission-inspiring guests to be passionate advocates for wildlife protection.

Antle says premium tour prices generate profits to underwrite the Rare Species Fund, which helps animals survive clear-cutting and interaction with human neighbors in remote parts of the world. The fund delivers equipment to park rangers who lack the tools to defeat poachers. Antle’s team works directly with the end-user to protect mountain gorillas of Uganda, orangutans of Borneo and jaguars in Brazil, according to their website.

While T.I.G.E.R.S. offers an exquisite tropical garden where guests can get up close and interact with wild, majestic creatures, right here in Myrtle Beach, the compound has faced its share of criticism from naysayers and animal-rights activists. Antle seems to take it all in stride.

“It’s very hard to get people to donate to conservation efforts,” Antle says. “We create an opportunity to get up close with uncaged animals to make a personal connection. They touch the wild so we can save the wild.”

About TIGERS:
The TIGERS Myrtle Beach Safari is home to more than 130 wild animals, including 60 big cats. The animals here are center stage in this fully interactive, hands-on experience, where you can cuddle up to tiger cubs, join the wolf pack, share a laugh with our apes, witness adult tigers running at full speed, and feed Bubbles, our African elephant. Plus, this is the only place in the world where you can meet the liger, the world’s largest big cat weighing in at more than 900 pounds. Go ahead, reach out and touch the jungle and create a lifetime of memories.